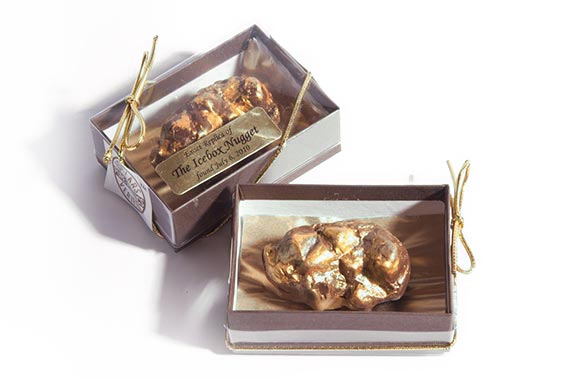 A bright yellow glimmer caught Charlie "Digger Chuck" Ward's eye as he panned. His eyes had fooled him in the past, so he reached in the pan to feel the weight of the clump. Ward handed it to his prospecting partner, Byron Janis, and asked "Is this what I think it is?"

It turned out to be the largest undisputed gold nugget found in the Black Hills in the past 120 years.

Ward and his partner, who call themselves the "Ice Box Mining Company," sold the precious nugget for an undisclosed amount to Chris Johnson, owner of the Clock Shop in downtown Rapid City, which often buys gold from prospectors. It is now on display at:

Chubby Chipmunk has been given permission to replicate the nugget and now carries the exact replica made with Fortunato #4 Chocolate. The pure Nacional chocolate thought to be extinct but rediscovered in 2007.

This form needs Javascript to display, which your browser doesn't support. Sign up here instead